re: re: efficient markets
I'd like to call attention to one more quote, from the last page of that article:

"In a perfect world, there wouldn’t be any stockbrokers," he says. "There wouldn't be any mutual fund managers."

Absolutely false. This gives me a chance to clarify the hyperefficiency comment; if everyone simply invested in index funds, throwing money at all issues in proportion to their size based only on their having been registered with the SEC, you would see stock prices utterly uncorrelated with the companies' underlying value. If a couple people then started picking over the carion, they'd make an absolute killing, and start to nudge the stocks of valuable companies higher and those of less valuable ones lower. They would reduce the returns from simply getting a stock stamped by the SEC and placed in the public market, and would start to increase the incentives of building a valuable business. If more people did that, the activity would become less lucrative, but would continue to improve the correlation between building a good business and the financial rewards that come from it.

It is quite plausible to me that, so long as the human race exists and has stock markets, there will be more than enough people trying to seek out market inefficiencies, and that the market will be, at least in broad terms, efficient enough that the bulk of people will have index investing as their best option.
- posted by dWj @ 10:45 PM

Re: efficient markets
Just to add something, I don't have quite the belief in efficient markets that these guys have, but I share their faith that the best thing a typical individual investor can do with his or her money is an index fund. Or, at any rate, something diversified with low expenses.

The main exception, I'd say, is if you enjoy stock-picking. Don't buy Enron or Global Crossing or whatever because your broker told you to, but if you've done some research and really believe that internet stocks are underpriced (or going to go up, anyway), and you've kept in mind that important industries don't always make good investments (sometimes all of the surplus goes to the consumer) and that great companies often have great expectations already built into their stock prices, and you want to buy, go ahead. But have realistic expectations. If you think you have found an investment with absolutely certain 50% annual returns, you should reconsider the odds of your analysis being absolutely certainly correct. And don't spend your winnings before the roulette wheel stops.
- posted by Steven @ 9:42 PM

“If you wake up in the morning and see Warren Buffett's face in the bathroom mirror,” Wellington says, “go ahead and buy some stocks. If you see anyone else’s face, diversify.”

And on he goes, persuasively, but as he does, his comments evoke an obvious question, one that no D.F.A. financial adviser dares ask: If all financial advice is worthless and the only sensible strategy is to buy an index fund that tracks the market, why would anyone need a D.F.A. financial adviser? Why, for that matter, should anyone pay D.F.A. the 50 basis points it takes off the top of its oldest fund? D.F.A.'s answer to this is interesting: It can beat the index. The firm doesn't ever come right out and say, "We can beat the market," but over and over again, the financial advisers in attendance are shown charts of D.F.A.'s large-cap funds outperforming Standard & Poor’s 500-stock index and D.F.A.'s small-cap fund outperforming the Russell 2000.

In each case, the reason for D.F.A.'s superior performance is slightly different. In one instance, D.F.A. found a better way to rebalance the portfolio when the underlying index changes; in another, it came up with improvements in capturing small-cap risk. All these little opportunities can be (and are) rationalized as something other than market inefficiency, but they are hard to exploit, even with the help of D.F.A.

Certain derivatives markets are potentially inefficient. The market for large cap stocks is probably hyperefficient; if an extra $1,000,000 in economic resources were put into chasing its inefficiencies in any way in which it would be reasonably likely to be deployed, it would probably result in less than $1,000,000 worth of extra efficiency. As a whole, markets, on a large scale, are efficient, much the way an Iowa winter is cold; in principle it would be possible for them to be more efficient, but compared to the standards that one is likely to compare them to (or find it useful to do so), they're efficient.
- posted by dWj @ 8:28 PM

the macroeconomy
Hey, that's some good NIPA:The first line is employee compensation, in billions of dollars per year; the second is consumer spending. On an annualized basis, the increase from October to November is around 8% and 13%, respectively. (Incidentally, note that these are nominal data, and that the inflation report was high, too, eating most of the 8% and much of the 13%.) Interest rates were up 15bp across the board.

The fed funds futures have actually been persistently pricing in a lower rate than the target between now and the next meeting; the gap dropped about 4 to 6 bp today, depending on what you're watching. And there is still a reasonable chance of an intermeeting cut. For one thing, there are likely some calendar effects associated with the early Thanksgiving; it may be that the next report will take away some of what this one gives. For another, state unemployment claims have been rising notably, and the jobs report January 4 (I assume) is likely to give an uptick in the unemployment rate. Meanwhile, the mortgage financing situation is pulling harder than ever on consumer liquidity. Once we get through the holiday season, if the financial situation still looks as it does now and a bit more evidence of weakening has rolled in, the fed may yet want to ease conditions before things get out of hand.
- posted by dWj @ 6:12 PM
Tuesday, December 18, 2007 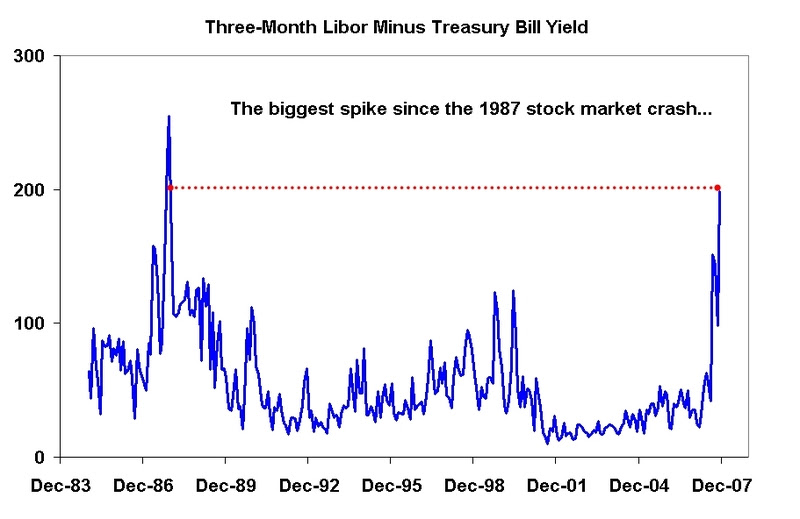 The Paulson/Bush plan
The Paulson/Bush mortgage plan being bandied about. It does not involve impairing contracts; it appears in some places to provide reasonable uniform definitions for terms used in securities that do not have clear definitions, and, where many securitization terms are written to require that the servicer preserve certain tax and accounting treatment, to relax the relevant tax and accounting rules so that the terms of the agreement can be met with more flexibility. At least that's how I read this.
- posted by dWj @ 3:40 PM

fed policy (Dean rambling)
Well, that sure was a number, wasn't it? I haven't actually looked at the report, but the second-hand sources certainly make me skeptical of the idea that the Fed should cut rates 50bp next week.

Treasuries sold off yesterday and today, but longer-term treasury rates are still about 25 to 30 bp lower than they were at the end of October, and I think a 25bp cut can be justified as simply keeping policy from tightening up; lower long-term rates, particularly of the safest instruments, represent to me some combination of low inflation expectations, weak confidence about the economy, and a propensity to save, all of which make me think the equilibrium short-term rate would come down, too, and that 4.5% would represent tighter policy now than it did six weeks ago. (I don't mean to suggest that a "neutral" interest rate can be gauged to within 25bp, but the change in it can be over short periods of time, and I think may be dropping a bit faster than long-term rates.) In fact, I'd think I'd be tempted, were I the FOMC, to say, "Okay, New York, until future instruction just try to keep the funds rate about 20 bp above the ten-year treasury yield." I'm weird like that, though.

There's some call for actually loosening monetary policy, and initial claims for unemployment have inched up to their highest level since the immediate aftermath of Katrina, but the unemployment rate hasn't changed appreciably since July, and income and spending never seem to be quite as dismal as we keep expecting. On an anecdotal level, a company with which I have a credit card recently sent me an unsolicited offer for an unsecured term loan at 6.99% APR, which makes me think the credit crisis is at least less nuts than it might be.

The tricky think about monetary policy is that it operates with such long lags; the fear is that, if we wait until we actually see deterioration before we initiate stimulative monetary policy, it will be too late by the time we do; on the other hand some of the fallout from the housing bubble has been awaited for 18 months or longer, and never quite seems to show itself. Paranoia of this kind can be inflationary when it affects monetary policy.
- posted by dWj @ 10:29 PM