low interest rates
I keep finding things in this article about T-bills trading at par that spark responses from me. Here's one I noted to my brother in email:

Equity investors say they have history on their side. The S&P 500 rose an average 8.4 percent in the six months before the last five increases in the Fed’s target rate for overnight loans between banks and added another 82 percent in the bull markets that followed, according to data compiled by Bloomberg. Shares typically rise before central banks push up interest rates because markets anticipate economic expansion first.

Now, there is in fact some reason to believe something like this would happen; the fed finally raises rates when it sees the economy is finally going to start improving, and the stock market can go up for the same reasons. Insofar as it would be commonly known or suspected when the Fed is going to start raising rates, though, this is exactly the sort of pattern that holds until it doesn't, and I would be cautious about regarding something like this as useful trading advice, at least without further context.

“If money is all going into short-term securities, at some point, investors will say ‘enough of it’ and the next incremental change will be for money to chase riskier assets.”

I fear he's right. Not that I'm sure risk premia are too low right now, but there's a long history of people in low interest-rate environments getting stuck on the notion that the higher returns they used to get should still be out there, and bidding up higher-risk securities until the yields go down, prompting even more risk-taking, often to the point where the risk-premium is probably negative, until it gets unsustainable. If investors accept that they do not have a moral entitlement to 5-10% returns, they — and everyone else — will probably ultimately be better off.

Incidentally, I've bumped into smart people who seem to think real interest rates shouldn't, by some law of economics, be negative. Most standard models suggest that during times of contraction they should; even people who prefer things now can be induced to save money at negative interest rates if they expect to have less income in the future, or even if there's sufficient uncertainty about the future. I'm not sure where this idea that real discount rates should always be positive comes from.
- posted by dWj @ 1:56 AM
Thursday, November 19, 2009

Negative interest rates
Again. More a consequence of quantitative easing and year-end effects than the end of the world, actually. They'll right themselves again in two months, but they won't be far from zero for a while. 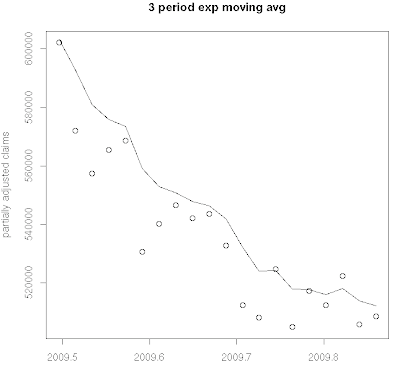 Incidentally, continuing claims are down on both an adjusted and unadjusted basis over the last few months, though this may be in some part people who ran out of benefits. I'm not sure that number contains a lot of useful information that isn't better represented in the monthly employment reports.

Initial Claims
The last prediction I gave, while not terrible, wasn't great, either, but failure doesn't deter a prophet. The report this morning was 512,000, and I'm predicting a dip a bit below 500,000 for next week, but a bounce back to 515,000 or so the week after that. 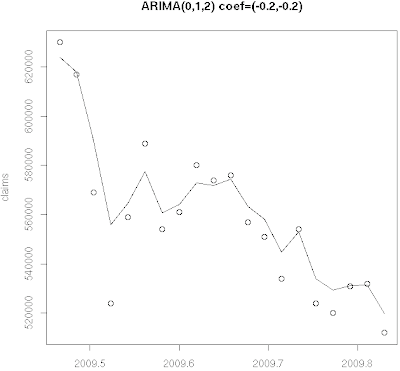 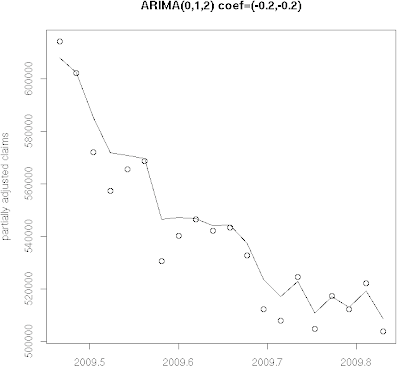 Fannie Mae (FNM/NYSE) is implementing the Deed for Lease™ Program under which qualifying homeowners facing foreclosure will be able to remain in their homes by signing a lease in connection with the voluntary transfer of the property deed back to the lender.

This is good for all sides (or at least better than the likely alternatives), and with minimal if any longer-term moral hazard concerns. You spare the homeowner the cost of the move, you spare both sides the cost of the foreclosure, and you keep someone living in the unit instead of allowing it to go derelict. This is a very positive development.
- posted by dWj @ 12:38 PM
Wednesday, November 04, 2009

Information received since the Federal Open Market Committee met in August September suggests that economic activity has picked up following its severe downturn continued to pick up. Conditions in financial markets have improved further, and activity were roughly unchanged, on balance, over the intermeeting period. Activity in the housing sector has increased over recent months. Household spending seems appears to be stabilizing, expanding but remains constrained by ongoing job losses, sluggish income growth, lower housing wealth, and tight credit. Businesses are still cutting back on fixed investment and staffing, though at a slower pace; they continue to make progress in bringing inventory stocks into better alignment with sales. Although economic activity is likely to remain weak for a time, the Committee anticipates that policy actions to stabilize financial markets and institutions, fiscal and monetary stimulus, and market forces will support a strengthening of economic growth and a gradual return to higher levels of resource utilization in a context of price stability.

In these circumstances, the Federal Reserve will continue to employ a wide range of tools to promote economic recovery and to preserve price stability. The Committee will maintain the target range for the federal funds rate at 0 to 1/4 percent and continues to anticipate that economic conditions, including low rates of resource utilization, subdued inflation trends, and stable inflation expectations, are likely to warrant exceptionally low levels of the federal funds rate for an extended period. To provide support to mortgage lending and housing markets and to improve overall conditions in private credit markets, the Federal Reserve will purchase a total of $1.25 trillion of agency mortgage-backed securities and up to $200 about $175 billion of agency debt. The Committee will gradually slow the pace of these purchases in amount of agency debt purchases, while somewhat less than the previously announced maximum of $200 billion, is consistent with the recent path of purchases and reflects the limited availability of agency debt. In order to promote a smooth transition in markets, the Committee will gradually slow the pace of its purchases of both agency debt and agency mortgage-backed securities and anticipates that they these transactions will be executed by the end of the first quarter of 2010. As previously announced, the Federal Reserve's purchases of $300 billion of Treasury securities will be completed by the end of October 2009. The Committee will continue to evaluate the timing and overall amounts of its purchases of securities in light of the evolving economic outlook and conditions in financial markets. The Federal Reserve is monitoring the size and composition of its balance sheet and will make adjustments to its credit and liquidity programs as warranted.