GDP
3Q GDP has been revised down 1.3 points since two months ago. It's not one big thing; half of it is from "investment", with some of that from inventory adjustment and some of it from fixed investment. Every category except government spending has been revised in the same direction, though, and it adds up.

Information received since the Federal Open Market Committee met in September November suggests that economic activity has continued to pick up and that the deterioration in the labor market is abating. Conditions in financial markets were roughly unchanged, on balance, over the intermeeting period. Activity in the The housing sector has increased shown some signs of improvement over recent months. Household spending appears to be expanding but at a moderate rate, though it remains constrained by ongoing job losses, sluggish a weak labor market, modest income growth, lower housing wealth, and tight credit. Businesses are still cutting back on fixed investment and staffing, though at a slower pace, and remain reluctant to add to payrolls; they continue to make progress in bringing inventory stocks into better alignment with sales. Financial market conditions have become more supportive of economic growth. Although economic activity is likely to remain weak for a time, the Committee anticipates that policy actions to stabilize financial markets and institutions, fiscal and monetary stimulus, and market forces will support contribute to a strengthening of economic growth and a gradual return to higher levels of resource utilization in a context of price stability.

In these circumstances, the Federal Reserve will continue to employ a wide range of tools to promote economic recovery and to preserve price stability. The Committee will maintain the target range for the federal funds rate at 0 to 1/4 percent and continues to anticipate that economic conditions, including low rates of resource utilization, subdued inflation trends, and stable inflation expectations, are likely to warrant exceptionally low levels of the federal funds rate for an extended period. To provide support to mortgage lending and housing markets and to improve overall conditions in private credit markets, the Federal Reserve will purchase a total of is in the process of purchasing $1.25 trillion of agency mortgage-backed securities and about $175 billion of agency debt. The amount of agency debt purchases, while somewhat less than the previously announced maximum of $200 billion, is consistent with the recent path of purchases and reflects the limited availability of agency debt. In order to promote a smooth transition in markets, the Committee will gradually slow is gradually slowing the pace of its purchases of both agency debt and agency mortgage-backed securities and these purchases, and it anticipates that these transactions will be executed by the end of the first quarter of 2010. The Committee will continue to evaluate the timing and overall amounts of its purchases of securities in light of the evolving economic outlook and conditions in financial markets.

In light of ongoing improvements in the functioning of financial markets, the Committee and the Board of Governors anticipate that most of the Federal Reserve's special liquidity facilities will expire on February 1, 2010, consistent with the Federal Reserve's announcement of June 25, 2009. These facilities include the Asset-Backed Commercial Paper Money Market Mutual Fund Liquidity Facility, the Commercial Paper Funding Facility, the Primary Dealer Credit Facility, and the Term Securities Lending Facility. The Federal Reserve will also be working with its central bank counterparties to close its temporary liquidity swap arrangements by February 1. The Federal Reserve expects that amounts provided under the Term Auction Facility will continue to be scaled back in early 2010. The anticipated expiration dates for the Term Asset-Backed Securities Loan Facility remain set at June 30, 2010, for loans backed by new-issue commercial mortgage-backed securities and March 31, 2010, for loans backed by all other types of collateral.

The Federal Reserve is monitoring the size and composition of its balance sheet and will make adjustments to its credit and liquidity programs as warranted prepared to modify these plans if necessary to support financial stability and economic growth.

non-farm payrolls
The data out today are much better than what we've been accustomed to; I'd like to note, though, that the seasonally unadjusted unemployment rate has been creeping down since the summer. Not that I'm all White Whale on seasonal adjustments being suboptimal for the labor market at this point in the business cycle. Not at all.
- posted by dWj @ 4:29 PM
Thursday, December 03, 2009

Initial Claims of Unemployment
Today's number came in at 457,000. If my rubric is to be taken seriously, job losses have significantly slowed down in the past few weeks, and the prediction for next week is lowered to 430,000, and possibly 410,000–420,000 if we take the recent trend seriously. 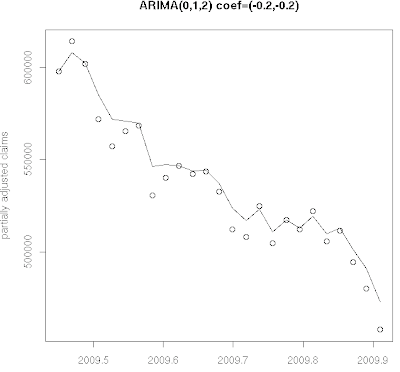 If my rubric isn't to be taken seriously, you should probably just look at the seasonally adjusted data: 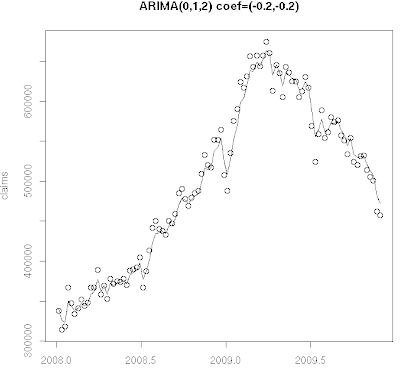 Initial Claims of Unemployment
My (atheoretic) model's predictions, based on the last two weeks of information, are that the number tomorrow will be around 490,000, and then next week will drop into the low 450s. Yahoo has forecasts of 480,000 and 500,000 tomorrow, so I'm not contributing much.