gdp
The "final" revision of Q4 GDP. The investment numbers were revised down a little bit. 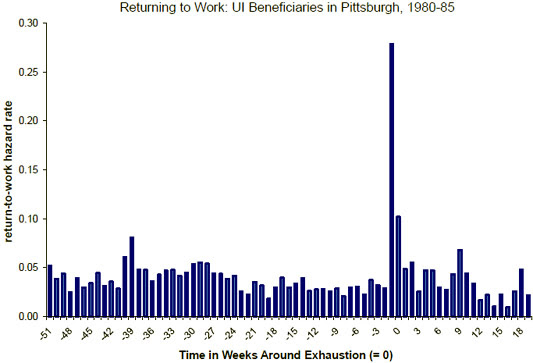 Krugman is quoted here as suggesting that incentives to find jobs simply don't matter in a recession because there aren't jobs; this seems like a particularly bad case of failing to recognize the heterogeneity of an economy, which is particularly important for things of this sort. A lot of people are losing jobs, and a lot of people are starting jobs; the balance for the last year or two has been slightly toward the former, but there have been a lot of job offers being made and accepted, even in 2009. Further, I don't think anybody imagines that this is primarily a case of people watching TV until two weeks before they're offered a job and then finding a job as soon as they care to look for one; if you're offered a job that would pay 20% less than what you made at your last job and would be less interesting or prestigious, you're more likely to take it if you have two weeks of unemployment compensation left than if you have 20.

This brings me to the point that, this notwithstanding, it doesn't necessarily mean that unemployment insurance is a bad thing. To some extent, letting people look around for the right job, rather than simply the first one that's offered, will benefit the economy in the longer run. This will be less true, though, when people overestimate what they're likely to be able to find, as is frequently the case in recessions; a lot of computer programmers in 2001 thought they were worth a lot more than they were, and the same is probably true of construction workers and investment bankers right now.

Finally, note that this is a bounded rationality argument. Ideally, people would be funding this search time from their own savings, which would be put aside with the possibility of unemployment in mind; they would weigh the value of continued search against taking a job sooner. For unemployment insurance to improve efficiency by enabling people to remain unemployed longer, it has to be playing a role in which people are more or less desperate for a job when they don't have the checks coming in and are much less concerned when they do. If someone with savings and a clear assessment about the value of taking a given job at a given time turns down a job that he would have accepted if he weren't getting unemployment checks, then that's pure loss.
- posted by dWj @ 11:29 AM
Tuesday, March 16, 2010

Information received since the Federal Open Market Committee met in December January suggests that economic activity has continued to strengthen and that the deterioration in the labor market is abating stabilizing. Household spending is expanding at a moderate rate but remains constrained by a weak labor market high unemployment, modest income growth, lower housing wealth, and tight credit. Business spending on equipment and software appears to be picking up, but investment in structures is still contracting has risen significantly. However, investment in nonresidential structures is declining, housing starts have been flat at a depressed level, and employers remain reluctant to add to payrolls. Firms have brought inventory stocks into better alignment with sales. While bank lending continues to contract, financial market conditions remain supportive of economic growth. Although the pace of economic recovery is likely to be moderate for a time, the Committee anticipates a gradual return to higher levels of resource utilization in a context of price stability.

With substantial resource slack continuing to restrain cost pressures and with longer-term inflation expectations stable, inflation is likely to be subdued for some time.

The Committee will maintain the target range for the federal funds rate at 0 to 1/4 percent and continues to anticipate that economic conditions, including low rates of resource utilization, subdued inflation trends, and stable inflation expectations, are likely to warrant exceptionally low levels of the federal funds rate for an extended period. To provide support to mortgage lending and housing markets and to improve overall conditions in private credit markets, the Federal Reserve is in the process of has been purchasing $1.25 trillion of agency mortgage-backed securities and about $175 billion of agency debt . In order to promote a smooth transition in markets, the Committee is gradually slowing the pace of these purchases, and it anticipates that these ; those purchases are nearing completion, and the remaining transactions will be executed by the end of the first quarter this month. The Committee will continue to evaluate its purchases of securities in light of the evolving monitor the economic outlook and conditions in financial markets financial developments and will employ its policy tools as necessary to promote economic recovery and price stability.

In light of improved functioning of financial markets, the Federal Reserve will be closing the Asset-Backed Commercial Paper Money Market Mutual Fund Liquidity Facility, the Commercial Paper Funding Facility, the Primary Dealer Credit Facility, and the Term Securities Lending Facility on February 1, as previously announced has been closing the special liquidity facilities that it created to support markets during the crisis. In addition, the temporary liquidity swap arrangements between the Federal Reserve and other central banks will expire on February 1. The Federal Reserve is in the process of winding down its Term Auction Facility: $50 billion in 28-day credit will be offered on February 8 and $25 billion in 28-day credit wil be offered at the final auction on March 8. The anticipated expiration dates for The only remaining such program, the Term Asset-Backed Securities Loan Facility remain set at , is scheduled to close on June 30 for loans backed by new-issue commercial mortgage-backed securities and on March 31 for loans backed by all other types of collateral. The Federal Reserve is prepared to modify these plans if necessary to support financial stability and economic growth.

Voting for the FOMC monetary policy action were: Ben S. Bernanke, Chairman; William C. Dudley, Vice Chairman; James Bullard; Elizabeth A. Duke; Donald L. Kohn; Sandra Pianalto; Eric S. Rosengren; Daniel K. Tarullo; and Kevin M. Warsh. Voting against the policy action was Thomas M. Hoenig, who believed that economic and financial conditions had changed sufficiently that continuing to express the expectation of exceptionally low levels of the federal funds rate for an extended period was no longer warranted because it could lead to the buildup of financial imbalances and increase risks to longer-run macroeconomic and financial stability.

Agency Bounds on Firm Rationality
The events to be described here took place about six months ago, but it came up in conversation over the weekend, and I thought I'd share it here.

The climax came when the buyer was in an office with his real-estate agent, on a speaker-phone conference call with lower-level employees of both lenders, neither with the real authority to renegotiate either agreement. In lieu of being able to negotiate, they began yelling at each other for a protracted period of time, over which it occurred to them that there was nothing in the agreements stipulating a minimum dollar value that either bank would accept. Accordingly, they lowered the sale price to $230,000, of which 5% would be $11,500, and the buyer walked away $23,000 richer.


Most of the time for most purposes, firms, especially large firms, tend to behave more "rationally" than individuals; commercial mortgage prepayments, for example, are much more sensitive to interest rates than you're average conforming home loan. There are certain important quirks of firm behavior, though, stemming from the fact that they are not really unitary actors, but collections of agents with varying knowledge and authority, and sometimes that results in firms acting clearly against their own interests.

Update: Felix Salmon suggests this may be rational behavior in a repeated-game, or (perhaps relatedly) an aversion to outcomes perceived as unfair in some sense. An interesting suggestion, but I think if the lenders' representatives had had the authority to change the deal to split the other $23,000 among themselves, they probably would have; this is a story of individuals doing what's easiest for them rather than their employer, partly due to constraints created (on some level) by the employer.
- posted by dWj @ 11:52 PM

productivity, growth, employment, and Okun gaps
On some level, I think it is common sense that the path to wealth is to have people able to produce things as efficiently as possible. At least in the long run, I think a full and detailed understanding gives the same result. Most people seem to be stuck on a middle kind of understanding in which it seems as though inefficiency is good, and I think that's partly due to a fixation on the business cycle; if you have a three year time horizon and we're going into a recession, there may well be things you could give people to do that are better than unemployment, even if they aren't efficient, but in the long run it probably means they will be doing the wrong kinds of things, or doing them poorly.

So here's the upshot: for most government programs — e.g. road building — the benefit is the obvious output -- more or better roads. "Jobs created" are the single biggest cost. If the road isn't worth that cost, you shouldn't build the road. It's not completely insane on a short-term basis during a recession to think that labor is less of a cost than it usually is, particularly if the people being hired are likely to be those who are currently unemployed and who are particularly likely not otherwise to become employed in the near future. It's entirely wrong, though, on a longer term. (This is the single biggest reason I roll my eyes when I hear about "green jobs". The environment is worth something, and it's worth paying for a better environment, but long-term employment in making the environment better is a cost, not a benefit, and needs to be recognized as such; "we take people out of other production and improve the environment" isn't win-win.) Even if politicians understand this, though, I never expect to hear them betray it, especially (again) during a recession.
- posted by dWj @ 11:46 PM