gdp
Drop-off in durable goods. Consumption growth has slowed this year, though in the last quarter that seems to have come from imports, which grew more slowly as well. Exports helped in the second quarter.

employment-population ratio
I put a bit more stock in the household survey than the payroll survey because I think the intensive quantities are probably more accurately measured there, and that they are the more important numbers. The unemployment rate itself, as has been well covered, is susceptible to changes in the participation rate; hence the employment-population rate, which Mankiw notes isn't showing much recovery: 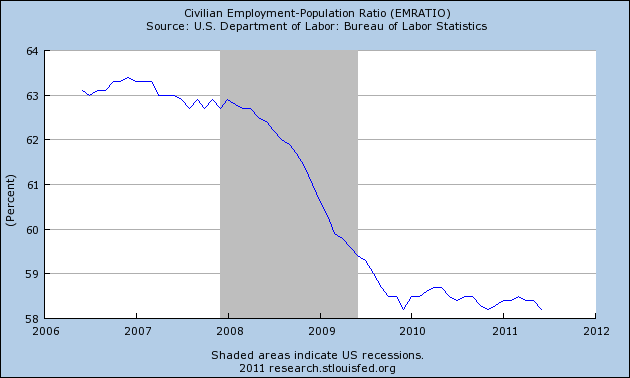 Over longer periods of time, the participation rate may be driven by demographic shifts, but short-run changes probably primarily indicate people entering or leaving the workforce because work looks easier or harder to get. Here's a longer-run chart of this statistic since the beginning of 1988, with longer-run trends filtered out:

What interests me about this in part is that, while employment is famously a lagging indicator of economic activity, upticks in the unemployment rate have also historically been pretty clear reliable indicators of recessions when other data are often ambiguous. In the past few months the unemployment rate has ticked back up from its recent lows, creating concern that we're in for another recession, but the arguments for employment as a recession indicator focus on data from the end of periods of robust growth; while I could perhaps usefully go back further with this chart, it's worth noting that 2003 and 2004 looked worse from this standpoint (in terms of direction) than recent data do; it may be that an economy that is already doing pretty poorly is unlikely to get new adverse momentum from relatively small changes in employment.

Update: Going back to 1970, to include arguably two "double-dip" recessions at the beginning of the window. 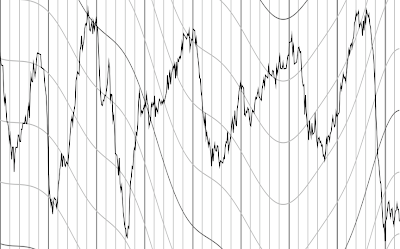