nominal GDP level targeting
There's a been a lot of talk in the blogosphere over the last few years about targeting GDP levels.  The naive thing to do might be to target the growth rate, but this leads to instabilities; both for reasons of stability and credibility, it's important to at least partly correct for past mistakes, so that a period of excess growth is followed by a reduction in target levels.

On some level, though, only partially adjusting is likely to be more credible than a full rigid level targeting regime.  For one thing, if we set the level optimally now (at the beginning of the regime), there may be more reason to believe that we would be tempted to "start over" in the future, resetting the target to a new path.  For another, if there is a large shock to the economy (in either direction), the temptation to reset the target will obviously be much stronger if it's rigid than if the regime itself dictates a partial adjustment.  Accordingly, it makes sense to me to set the initial target path in part on the basis of past changes in GNP; in a simplistic setting these would be regarded as "sunk", but my contention is that they interact with policy going forward to affect expectations, and therefore should factor into policy decision-making.

One particularly cute way of achieving this is to set the nominal GDP target level, two years ahead, at some multiple of the total GDP since the beginning of the republic.  If the growth rate is e.g. 5%, this would mean that shocks are accommodated, instead of resisted, after about two decades; it seems likely to me that we would want a shorter accommodation period, in which case the target level should be a discounted sum, but the charts I've produced here are based on the naive sum. 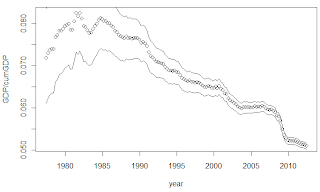 The data from FRED go back to 1947.  Making very conservative assumptions about what happened before then, we can pin down the ratio of current GDP to total accumulated GDP to between the lines.  As inflation has come down, the ratio has gradually come down over the past couple decades; it has been helped down more recently by a large recession (which you may have heard about). 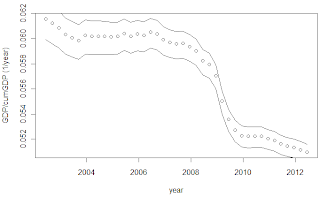 In all the plots, the natural units of the vertical axis are 1/year, i.e. I'm dividing an annualized GDP by a sum. 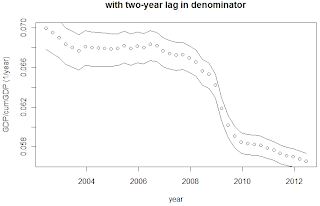 Insofar as I've proposed a two-year ahead level target, this is probably the plot to look at.  A 5% annual increase would suggest a multiple of 0.055 or so, in which case the Fed would be encouraged to adopt a contractionary stance from current levels; in essence, it would still be fighting back at inflation from the nineties, and even to some extent the Carter years (which still get 1/8 as much weight as the most recent quarter does; all four Carter years count the same as the last 6 months).  Most likely a shorter backward-looking window would be desired.

Update: At the risk of belaboring the obvious, the Fed could adopt this long-window backward-looking plan with a ratio of 0.06 or even (on the basis of the middle of the last decade) 0.068 or something; I'm imagining the Fed wouldn't want to lock itself into that high a presumed rate of inflation.
- posted by dWj @ 1:27 PM
Wednesday, June 13, 2012

Swiss Currency Manipulation
In case you don't know the back story, a lot of people with euros have recently been inclined to trade them for Swiss francs. This has increased the value of the franc to the point where, a couple of months ago, the Swiss National Bank declared that they would henceforth buy as many euros as people wanted to sell them at a price of 1.2 francs each. Here's what I found interesting:

Last Thursday, the central bank reported that the value of its international currency reserves surged by 66.2 billion Swiss francs ($69 billion) in May to CHF303.8 billion. To put that in perspective, the increase was 1 1/2 times the size of Switzerland's monthly GDP.

As the article points out later, some of this could well be due to currency appreciation - the Swiss bank didn't sell 66.2 billion francs in May - but it seems likely that the bank created currency more valuable than the entire real product of the country. The author of the article insists that the bank will be unable to sustain this, but note the difference between this and the failure of the Bank of England to prop up their currency 20 years ago: when a central bank wants to prop up the price of its currency against market movements, it has to give up foreign currencies (or at least some kind of assets) to buy their currency. When it runs out of foreign reserves and start selling the furniture, this becomes tricky. On the other hand, if the Swiss bank believes the demand for their currency is temporarily inflated -- either because the euro is being undervalued or because holders of euros are right to flee the euro but are disproportionately preferring the franc to other alternative assets -- they can create as much supply as they want to. They do face some currency risks -- if they keep their proceeds in euros and the euro collapses, they will face problems if they later wish to pull the new francs off of the market. But if they can diversify their assets into whatever mix of assets they actually want to maintain the value of the franc with respect to, they should be fine.
- posted by Steven @ 2:20 PM
Friday, June 01, 2012