GDP
Investment slowed down less quickly in the second quarter, and the headline GDP result was only a 1% annualized drop, but a lot of the good news here is a bit questionable. More than a point is added by government spending; net exports added more than another point, as imports dropped more rapidly than exports.

I guess in other contexts I've criticized the line of reasoning implicit in my last point, so let me unwrap something here: the fact that there was a big drop in imports, conditional on the other numbers reported here, means that more of the ongoing fall in spending by Americans fell on our trade partners and less of it fell on American producers. So I suppose as an isolated data point it suggests weak demand, but conditional on the rest of it it really does mitigate how weak American production is. 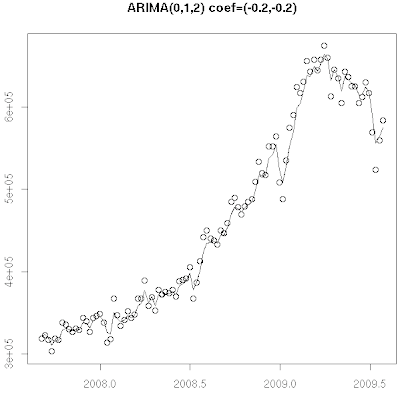 Seasonal adjustments for this data set tend to be largest in the summer; this will settle down when we're past the usual period of industrial furloughs and students working summer jobs. I'm traveling for a while; perhaps the data will be tame by the time I get back.

Taylor argued that his rule implies a fed funds rate of +0.5%. He specifically attacked a reported Fed staff estimate of an “optimal” Taylor rate of -5% as having "... both the sign and the decimal point wrong.”

What’s going on? The answer can be seen in a note published by Glenn Rudebusch of the San Francisco Fed [in May]; it justifies the Fed’s -5% figure and reads like a direct reaction to Taylor’s criticism, even though it does not reference his speech (see “The Fed’s Monetary Policy Response to the Current Crisis,” FRBSF Economic Letter 2009-17, May 22, 2009). The difference is fully explained by two choices. First, Taylor uses his “original” rule with an assumed (but not econometrically estimated) coefficient of 0.5 on both the output gap and the inflation gap, while the Fed uses an estimated rule with a bigger coefficient on the output gap. Second, Taylor uses current values for both gaps, while the Fed’s estimate of a -5% rate refers to a projection for the end of 2009, assuming a further rise in the output gap and a decline in core inflation.

The Taylor rule prescribes (or, in its original formulation, predicts) an interest rate that is a sum of coefficients times the output gap and the rate of inflation. As Hatzius notes, there can be disagreement about the coefficients;* there can also be disagreements about the rate of inflation, and even more about the output gap. The output gap is the fluffier of the two, and Mankiw suggested using the unemployment rate as a proxy; I like this, not only because it gives something that's actually visible, but because, in natural units, he got coefficients of 1.4 on both the unemployment rate and the inflation rate; essentially, the rule is (nearly) that the fed funds rate should be 1.4*(inflation-unemployment+6).

My preferred measure of inflation is the trimmed-mean PCE, which on a smoothed basis is around 1.8% lately. 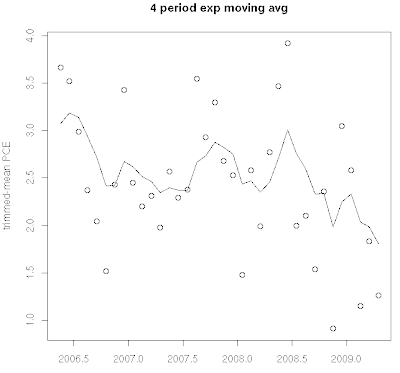 Even with recent improvements in unemployment claims data, I would expect this target rate to get lower before it gets higher. Since monetary policy doesn't seem to show up in economic data until 8 months later, and doesn't really kick in until after that, I can see the appeal of using predicted values, providing the predictions are decent, but I don't believe the studies I've seen have calibrated their coefficients based on "predicted values" — this 1.4, for example, is based on contemporaneous data. If you want to use predicted values, you need to perform an exercise based on a consistent set of at-the-time predictions.

*A paper by Clarida, Gali, and Gertler — I think — found that fed policy after 1982 was well described by an autoregressive process with a coefficient of about 2 on the inflation rate and 1 on the output gap.
- posted by dWj @ 1:08 PM

cashflow vs. earnings
California passes a budget bill, demonstrating the distinction between earnings and cash flow (or, analogously, wealth and liquid cash). The easiest way to convert wealth to cash is to borrow money; this increases cash but not wealth, and is counted as cash flow but not earnings. California can't really borrow at this point, so they dissave by converting illiquid assets to cash

the state will be authorized to sell 17 state office buildings to raise cash, renting the space back from the new landlord. The Orange County Fairgrounds also will go on the market.

The state also will accelerate collection of 2010 personal income and corporate taxes to bring in revenue earlier than anticipated.

and borrow by accruing unpaid liabilities

One of those gimmicks was to defer state employee paychecks by one day, from June 30 to July 1, 2010, for a savings on paper of $1.2 billion.

Note that this last is only a one-day loan (or one day longer than usual, in any case); they're constrained by liquidity, but also by the timing of their liquidity, since certain rules apply to cash flow in certain time periods.

Even state workers, long protected by powerful public employee unions, have been affected. Schwarzenegger has ordered them to take three days off a month without pay, equating to a 14 percent pay cut.

There have been situations in which the federal government in particular has gone back, after the fact, and provided back-pay for "unpaid" furloughs; if you suppose they're going to do that, this goes under accruing unpaid liabilities instead of an actual cut in expenditures. That was typically after a temporary budget impasse, though, after which money was again flowing freely; California is likely not to be in that position for a long time, and while I wouldn't be surprised if they eventually get paid for their unplanned days off, I wouldn't be surprised if they don't, either. In either case, it conserves cash now.

Most individuals, insofar as they budget, use cash-flow accounting, but, while public companies report cash flows, they also report earnings, and earnings are designed to give a more accurate long-term view of the company's financial health. Governments, especially as it relates to budget rules, tend to use cash-flow accounting, and entities on the verge of equitable insolvency tend de facto to move in that direction as well. California, of course, is both.
- posted by dWj @ 12:51 PM
Thursday, July 23, 2009 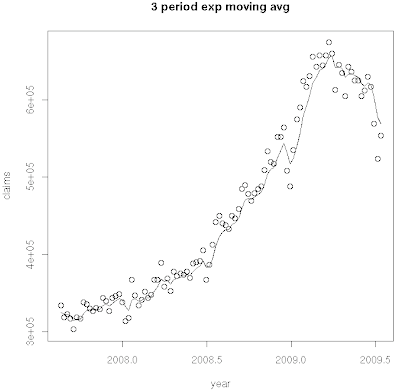 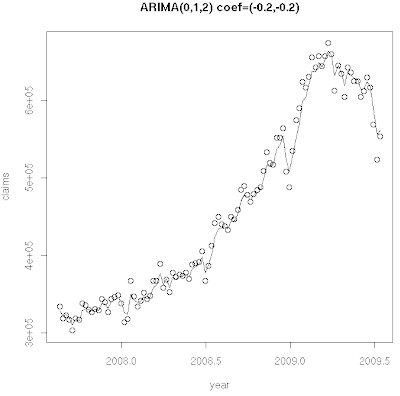 The unadjusted number is down 90,000 from the week before, rather the reverse of last week; both adjusted and unadjusted numbers are down about 10,000–15,000 from two weeks ago, as the seasonal adjustment has overadjusted in both directions in the meantime.

liquidity facilities
An exchange for accounts receivable has picked up business due to the troubles of CIT, which used to purchase a lot of accounts receivable but has cut back (and may go to zero in the foreseeable future).
- posted by dWj @ 7:04 PM
Saturday, July 18, 2009

Buffett Partnership Letters
Warren Buffett ran an investment partnership from 1959 to 1969, and sent out letters to his partners (as he now does to Berkshire Hathaway shareholders). These letters are now available online.
- posted by Steven @ 12:39 AM
Friday, July 17, 2009

On an unadjusted basis, the initial claims data showed a fairly large increase last week—up 86,000 workers. But claims for unemployment compensation typically rise in early July as auto plants shut down to retool for the new model year. The jump in claims this July hasn't been as large as in years past since many of the auto plants were waylaid earlier in the year. So on a "seasonally adjusted" basis, the data showed a drop in claims of 47,000 workers.

Fewer remaining factory workers might reduce the number of workers available to furlough. Similarly, some of the price increases pushing up the recent CPI report were actually decreases which might have run into support as already squeezed margins simply couldn't squeeze as much as usual. 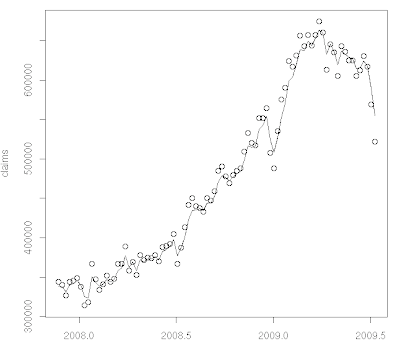 As I expect this interests me more than anyone else, I'll try to restrain myself a bit here, but this line is the long-run (two weeks out) prediction that would be made based on data up to the time for which it's plotted using an ARIMA(0,1,2) model with both MA coefficients set to -0.2. It clearly hugs the data fairly well over any period of more than a couple weeks, it's previsible at the time of the data release to which you would compare it, and the change from one period to the next exhibits one third of the variance of the original series.

The last point on the new curve is 555,000, down from 590,000 the week before; the last two points have been significantly below recent values, and this figure responds more quickly to repeated deviations like that than the exponential moving average I posted before, while still filtering out two-thirds of the noise. I might, however, persist in using the exponential moving average just because 1) it's simpler to explain, and 2) it requires less "state"; if I give you today's exponential moving average, and you see next week's release, it's easy to calculate next week's average, while this requires two data points and is less mathematically simple. I haven't decided yet which I prefer, and I'd welcome any input anyone else wants to offer.

Initial Claims -- general notes
Incidentally, let me give some love to Karl Smith, whose posts on initial claims inspired me to start paying attention to (and posting on) a series I followed religiously for several years until about a year and a half ago.

He, like most of the world, smoothes the series with a 4-week sliding-window average; I use a three-week exponential, which I discovered a few years back frequently gave a better prediction of the next number than the consensus forecast did, except in the immediate post-Katrina period. I dislike sliding-window averages in particular for anything in which I'm looking for a trend; "trend" suggests I'm looking at changes from one week to the next, and the change from one week to the next with a sliding window is just a multiple of the change from one week to the week four weeks later, so it's noisy and is affected by a fair amount of old information. The change in an exponential moving average is more plausibly the innovation in that moving average.

It happens that the exponential-moving average amounts to modeling the series as an ARIMA(0,1,1). If you don't know what ARIMA is, it doesn't really matter; I didn't know what ARIMA was when I started doing this, and didn't actually work out that that's what this was until about a week ago; playing around in the last week, I find as a fairly robust result that ARIMA(0,1,2) seems to fit the data better, though the coefficients change a fair amount if I try fitting different 2-year data samples to that model. (ARIMA(0,1,1) seems to bounce around a bit, too, though a coefficient corresponding to a 3-week average doesn't seem to get much more than one standard error from the estimate regardless of the sample I look at.) I may start using a smoothing technique based on an ARIMA(0,1,2) at some point. 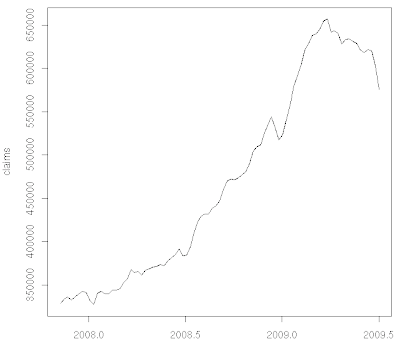 Last week's figure was revised up very slightly, but this week's number was 522,000, dropping the moving average to 576,000. This looks very good, at least by recent standards

Extrapolating
This cartoon isn't directly related to finance, but sometimes it comes uncomfortably close.
- posted by Steven @ 1:00 AM
Thursday, July 09, 2009 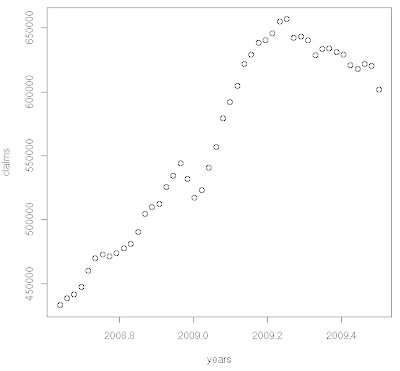 High by the standard of an average point in the business cycle, but looks like a confirmed downtrend. The calendar issue makes next week's release more interesting.

bank failures
It's Friday for federal purposes, and that means the FDIC is closing down failing banks. Before today six banks had failed in Illinois this year; today, as of right now, another six have as well. (Also, one in Texas.)

The PrivateBank and Trust Company, Chicago, Illinois, Assumes All of the Deposits of Founders Bank, Worth, Illinois

Galena State Bank and Trust, Galena, Illinois, Assumes All of the Deposits of the Elizabeth State Bank, Elizabeth, Illinois

State Bank of Lincoln, Lincoln, Illinois Assumes All of The Deposits of the John Warner Bank, Clinton, Illinois