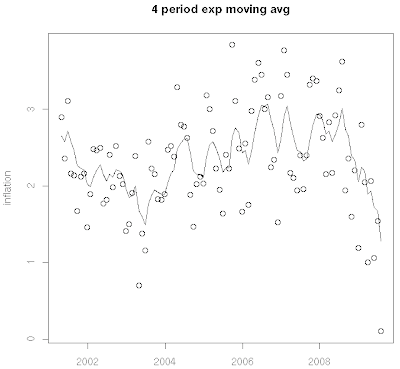 The series seems to have been revised since I last saw it. The general moves shouldn't be greatly affected.

initial claims
Let's see whether I still remember how to create and post plots. 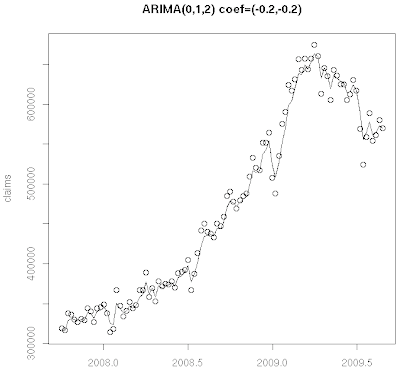 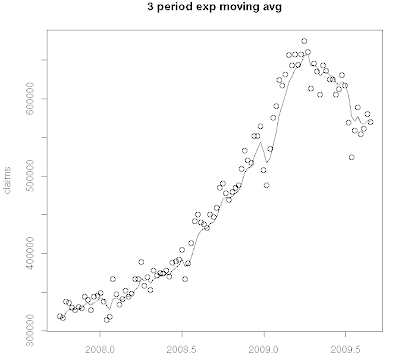 Initial claims reported this morning at 570,000, which is pretty close to where the series smoothes to, as well. 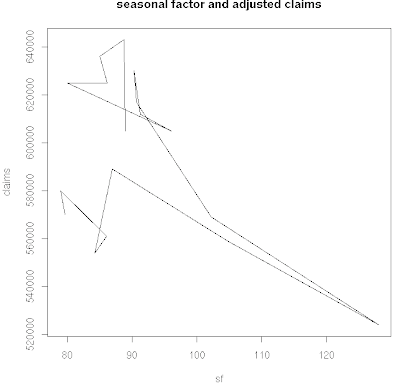 This week's adjustment factor (for data released next Thursday) is about the same as last week's, but then it bounces around a little bit near Labor Day; we may see a rise in this number two weeks from now followed by a dip due to the seasonal adjustment not being calibrated to current economic conditions.

Update:
If I back out a quarter of the seasonal adjustment, this is what the last 17 weeks look like: 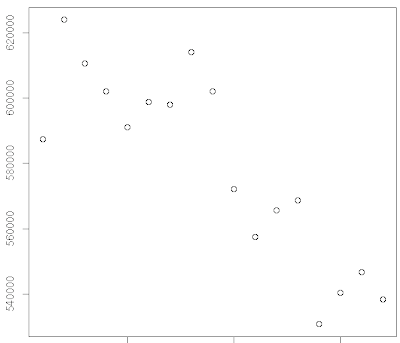 GDP
The GDP report for the second quarter was revised today:The faster write-off of inventories was, I believe, expected, but the trade and government spending numbers offset it, so the headline number is the same as was reported a month ago.

Fed statement
The FOMC statement from August 12, as revised:

Information received since the Federal Open Market Committee met in April June suggests that the pace of economic contraction is slowing economic activity is leveling out. Conditions in financial markets have generally improved improved further in recent months weeks. Household spending has shown further continued to show signs of stabilizing but remains constrained by ongoing job losses, sluggish income growth, lower housing wealth, and tight credit. Businesses are still cutting back on fixed investment and staffing but appear to be are making progress in bringing inventory stocks into better alignment with sales. Although economic activity is likely to remain weak for a time, the Committee continues to anticipate that policy actions to stabilize financial markets and institutions, fiscal and monetary stimulus, and market forces will contribute to a gradual resumption of sustainable economic growth in a context of price stability.

The prices of energy and other commodities have risen of late. However, substantial resource slack is likely to dampen cost pressures, and the Committee expects that inflation will remain subdued for some time.

In these circumstances, the Federal Reserve will employ all available tools to promote economic recovery and to preserve price stability. The Committee will maintain the target range for the federal funds rate at 0 to 1/4 percent and continues to anticipate that economic conditions are likely to warrant exceptionally low levels of the federal funds rate for an extended period. As previously announced, to provide support to mortgage lending and housing markets and to improve overall conditions in private credit markets, the Federal Reserve will purchase a total of up to $1.25 trillion of agency mortgage-backed securities and up to $200 billion of agency debt by the end of the year. In addition, the Federal Reserve will buy up to is in the process of buying $300 billion of Treasury securities by autumn . To promote a smooth transition in markets as these purchases of Treasury securities are completed, the Committee has decided to gradually slow the pace of these transactions and anticipates that the full amount will be purchased by the end of October. The Committee will continue to evaluate the timing and overall amounts of its purchases of securities in light of the evolving economic outlook and conditions in financial markets. The Federal Reserve is monitoring the size and composition of its balance sheet and will make adjustments to its credit and liquidity programs as warranted.

The last new sentence is probably the most notable change, other than the generally more upbeat tone.


My local newspaper this morning showed a picture of a guy standing in a line of job seekers at a Career Expo. He had his cap on backwards.

If, in the unlikely event, he were contacted for the household survey of employment, they would ask him if he had a job. He would say no. Then, they would ask if he had looked for a job in the last six weeks. He could truthfully say yes. He would be classified as in the labor force but unemployed.

Perhaps they should add another question to the survey: "Did you wear your cap backwards when you applied for a job?" If so, he would be classified as not in the labor force, and the number of unemployed would go down by one.

I hope Bob McTeer will forgive me for copying his entire blog entry.

As for those who wear their caps backward at job fairs, they will always be with us. The effect that McTeer noted artificially raises today's numbers, but it artificially raised the numbers in 2004, presumably by about the same amount — perhaps a bit less, as the marginally employable are more employable in a tight labor market. But I don't think this effect has an impact on the meaning of a 9.4% unemployment rate.