cartels
Near as I can tell, San Francisco is accusing the Jets of not cooperating with the NFL's price-fixing scheme, and the Jets are denying it.
- posted by dWj @ 4:36 PM
Thursday, September 24, 2009

jobless claims
I do, strictly speaking, have better things to be doing. The labor market continues on a trajectory of improvement that, at least by some measures, it has sustained consistently for half a year. 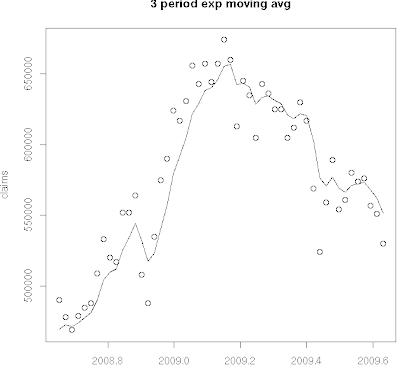 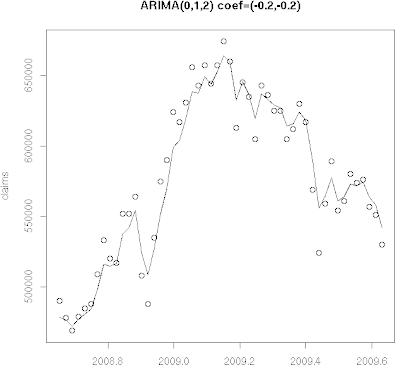 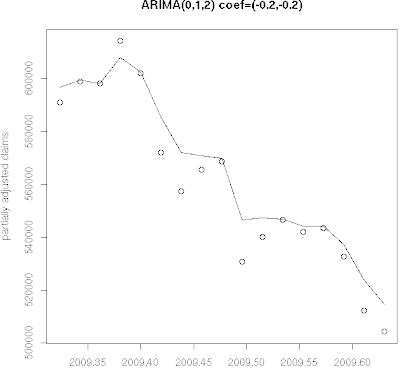 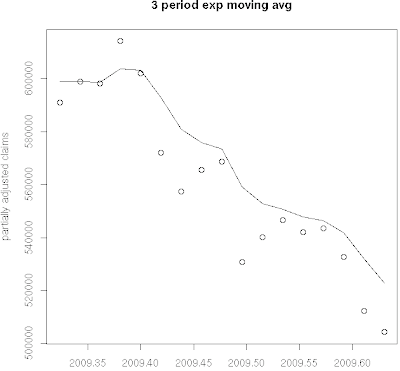 Information received since the Federal Open Market Committee met in June August suggests that economic activity is leveling out has picked up following its severe downturn. Conditions in financial markets have improved further in recent weeks , and activity in the housing sector has increased. Household spending has continued to show signs of stabilizing seems to be stabilizing, but remains constrained by ongoing job losses, sluggish income growth, lower housing wealth, and tight credit. Businesses are still cutting back on fixed investment and staffing but are making , though at a slower pace; they continue to make progress in bringing inventory stocks into better alignment with sales. Although economic activity is likely to remain weak for a time, the Committee continues to anticipate anticipates that policy actions to stabilize financial markets and institutions, fiscal and monetary stimulus, and market forces will contribute to support a strengthening of economic growth and a gradual resumption of sustainable economic growth return to higher levels of resource utilization in a context of price stability.

The prices of energy and other commodities have risen of late. However, With substantial resource slack is likely likely to continue to dampen cost pressures , and and with longer-term inflation expectations stable, the Committee expects that inflation will remain subdued for some time.

In these circumstances, the Federal Reserve will employ all available continue to employ a wide range of tools to promote economic recovery and to preserve price stability. The Committee will maintain the target range for the federal funds rate at 0 to 1/4 percent and continues to anticipate that economic conditions are likely to warrant exceptionally low levels of the federal funds rate for an extended period. As previously announced, to To provide support to mortgage lending and housing markets and to improve overall conditions in private credit markets, the Federal Reserve will purchase a total of up to $1.25 trillion of agency mortgage-backed securities and up to $200 billion of agency debt by the end of the year. In addition, the Federal Reserve is in the process of buying $300 billion of Treasury securities. To The Committee will gradually slow the pace of these purchases in order to promote a smooth transition in markets as these purchases and anticipates that they will be executed by the end of the first quarter of 2010. As previously announced, the Federal Reserve's purchases of $300 billion of Treasury securities are completed, the Committee has decided to gradually slow the pace of these transactions and anticipates that the full amount will be purchased will be completed by the end of October . 2009. The Committee will continue to evaluate the timing and overall amounts of its purchases of securities in light of the evolving economic outlook and conditions in financial markets. The Federal Reserve is monitoring the size and composition of its balance sheet and will make adjustments to its credit and liquidity programs as warranted.

minimum wage
After three consecutive years of minimum wage hikes, incidentally, we have wages for those employed growing in a recession, and, while unemployment overall has not yet reached the early eighties' peak, it has passed that peak for teenagers.

why people buy insurance
Kling quotes... well, look at the first sentence of the excerpt, and see whether you can guess:

My best guess is that most insurance is bought not to reduce risk but instead to signal prudence and caring.

Either way, it's worth clicking through; if you're not familiar with its author, you probably should be.
- posted by dWj @ 12:48 PM


Corus Bank, National Association, Chicago, Illinois, was closed today by the Office of the Comptroller of the Currency, which appointed the Federal Deposit Insurance Corporation (FDIC) as receiver. To protect the depositors, the FDIC entered into a purchase and assumption agreement with MB Financial Bank, National Association, Chicago, Illinois, to assume all of the deposits of Corus Bank, N.A.

This was a big one, but well telegraphed.

As of June 30, 2009, Corus Bank had total assets of $7 billion and total deposits of approximately $7 billion. MB Financial Bank will pay the FDIC a premium of 0.2 percent to assume all of the deposits of Corus Bank. In addition to assuming all of the deposits of the failed bank, MB Financial Bank agreed to purchase approximately $3 billion of the assets, comprised mainly of cash and marketable securities. 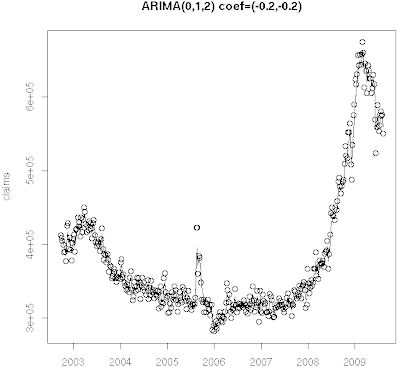 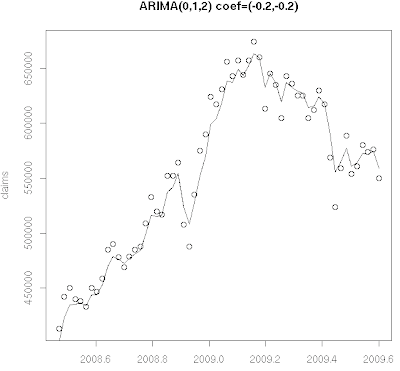 Pursuing the idea that the seasonal adjustment has been overdone in a time when some of the seasonality has been wrung out of the labor market, last week's partially-unadjusted number is revised to 544,000, while this week's is 526,000. 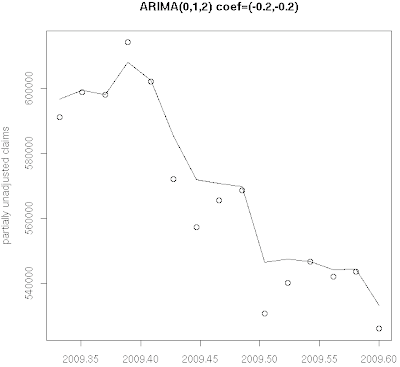 That smoothes to 533333, where insignificant figures are included because of an aesthetic coincidence. The 3-week exponential moving average is down to 540,000: 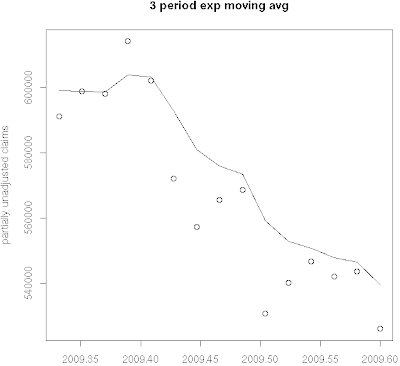 The last time this partially unadjusted number exceeded its 3-week moving average was the report of June 18. (This is also true for the other smoothing mechanism, though that's had a few much closer calls.)

Vantus Bank, Sioux City, Iowa, was closed today by the Office of Thrift Supervision, which appointed the Federal Deposit Insurance Corporation (FDIC) as receiver. To protect the depositors, the FDIC entered into a purchase and assumption agreement with Great Southern Bank, Springfield, Missouri, to assume all of the deposits of Vantus Bank.

the state of macroeconomics
Krugman recently had a longish piece on the state of macroeconomic theory; it's full of caricature about both macroeconomics and the efficient market hypothesis, neither of which is Krugman's field. (I found myself wondering, again, "Why do so many otherwise intelligent people misunderstand how the EMH is wrong?") Scott Sumner (a proponent, I believe, of the EMH) responds; I tend to differ from Sumner both in the credit I give efficient financial markets and in the power I believe monetary policy has (he has implied that appropriate monetary policy can cure all economic ills, though he hints to the contrary in

Arnold Kling argued that the crisis reflected a real problem with the economy, the need to reallocate labor and other resources. I do think there was a real problem in late 2007,

), so I don't really think he quite nails the problems with Krugman's piece, but he's at least in more or less the right field, and I'm not inclined to flesh out my own complaints right now.
- posted by dWj @ 10:40 AM
Thursday, September 03, 2009

Initial Claims
The latest number is the same number as reported last week (570,000), though last week's number has been revised up slightly; in any case, it doesn't change the plots I've been producing much, so instead I'm going to put up plots based on partially-unadjusted numbers. In what follows I've taken the seasonally adjusted new claims and multiplied back in the fourth root of the seasonal factor. 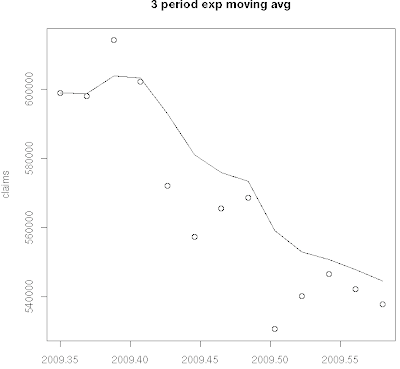 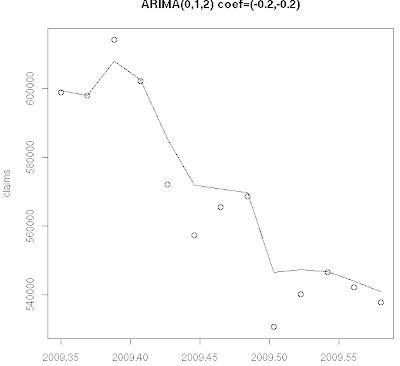