3Q GDP
The BEA release. "Residential fixed investment" (homebuilding), which added .55 to the Q2 figure, subtracted .8 from the Q3 figure; most other kind of investment were also growing more slowly, but not to the same degree. Imports continued to increase, but not at the very high rate at which they were increasing in Q2.

There is, however, another option: for the Fed to clarify its “exit strategy” from its current, unconventional monetary stance. This would mean making clear that the Fed has no plans to tighten policy through increases in the federal funds rate, even if inflation temporarily exceeds the rate regarded as consistent with the Fed’s mandate. In short, the Fed should allow a one-time-only inflation increase, with a plan to control it once the target level of prices has been reached.

Indeed, I think the good that would come from quantitative easing would work through similar channels.

Individual microeconomic actors are affected pretty much exclusively by prices. Insofar as they're rational, they respond to prices and expectations of future prices. If the Fed floods the system with money but is perfectly clear (and credible) that it's going to withdraw the money if it actually causes future prices to rise, then it should have no effect on the behavior of economic agents and thus no effect on the economy. Price-level targeting — or NGDP targeting — is more time-consistent, and therefore more credible, than inflation targeting, and strikes me as the best monetary response we're likely to come up with to the current economic weakness.
- posted by dWj @ 10:12 AM
Friday, October 01, 2010

inflation
The Dallas fed released its trimmed-mean PCE inflation measure for August this morning; it was around 1.5% on an annual basis, the highest number since last September. The four-month moving average ticks up to about 0.96% annual inflation, where the 6 is naturally for entertainment purposes only. 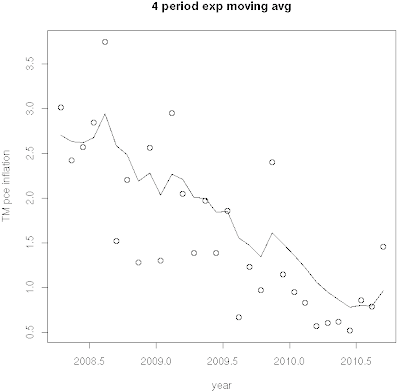 GDP
2nd quarter GDP was revised again yesterday. This was the third release of this data, so there weren't any major changes.