Berkshire Hathaway
The annual letter is up. So is the annual report, but that tends to be of somewhat less general interest.
- posted by dWj @ 1:18 PM
Friday, February 26, 2010

GDP
GDP was revised up slightly, largely due to non-residential investment, especially in inventories. (Growth in final sales was revised down to 1.9% at an annualized rate from 2.3%.)

inflation
It's been a little while since I posted the trimmed-mean PCE inflation rate, so this is provided for my benefit as much as anyone else's: 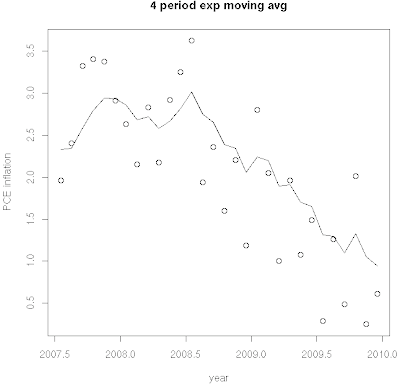 Discount rate hike
The Fed has raised the discount rate to 75bp. This is probably more symbolic than anything right now.
- posted by dWj @ 5:48 PM
Monday, February 15, 2010


The number 4 occurs less frequently than chance would dictate in the tenths of a cent digit for quarterly earnings.

Toyota and Japan
A couple of days ago, the Wall Street Journal ran an interesting story asserting that Toyota's poor crisis-management was rooted in Japanese culture.
- posted by Steven @ 1:10 PM
Wednesday, February 10, 2010 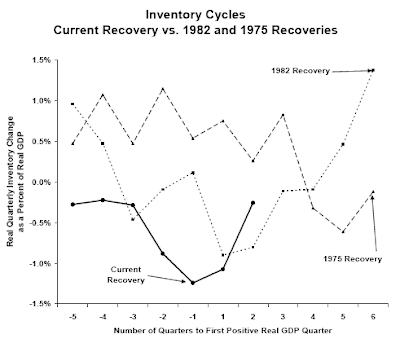 Source (pdf). Note that, in the current cycle, all 7 quarters he shows have seen the level of final sales as higher than GDP, and that much of the recent GDP growth has been a reduction in the gap (as production has partly caught up with final sales), not an actual increase in inventories. This guy is making the assertion that the demand for inventories could lead to a significant boost to the economy going forward, as it did after the 1982 recession. (cf. my dicta in the last GDP report.)
- posted by dWj @ 3:57 PM
Friday, February 05, 2010

employment situation
The unemployment rate for January, based on the household survey, has been reported at 9.7%, down from 10% last month, with the participation rate somewhat higher, and an implication of 540,000 more employed people, though the payroll number, based on the employer survey, showed a statistically insignificant change in the number of jobs. The employer survey is popular with economists because of its smaller statistical error bars, but there are a couple of reasons I prefer the household survey (and none of them is because it's more optimistic).

Each set of numbers is, as indicated, based on a survey; it's not possible to go around finding out exactly who is employed by whom and tallying up all the numbers precisely. A certain number of known employers are surveyed, and a certain number of random individuals are surveyed. To get aggregate numbers of jobs created and so on, assumptions have to be made as to how many people there are, how many new businesses were created, how many businesses went out of business, and so on. It is particularly near turning points in the business cycle when the estimates used in the employer survey seem to be at their worst; they tend to be based on factors from the previous year or two, and thus the payroll survey usually looks bad for a while after jobs are being created (as the BLS underestimates the number of new businesses starting up) and looks good for a while after jobs are being lost. If what we're interested in is new news, instead of old news, this is a big flaw. Further, the biggest assumption that goes into the interpretation of the household survey is the change in U.S. population; if the population is presumed to be bigger than it is, it will appear that there are more employed people than there are, but it will also appear that there are more unemployed people than there are. This biggest assumption exactly cancels itself out in the calculation of the unemployment rate. Further, the unemployment rate, being scaled to the size of the economy, is a better indication of labor market slack; if the number of jobs is growing at the same rate as the population and labor force are growing, labor market conditions aren't changing.

The reasons for preferring the payroll survey do suggest that an unexpected 0.3% drop in the unemployment rate should be taken with a grain of salt, but — here I get all econometric — there is a positive serial autocorrelation between changes in the unemployment rate from month to month, which is to say that reported drops tend to be followed by reported drops and reported rises are followed by reported rises. A simple atheoretic ARIMA fit to the last 10 years of data predicts a reading of 9.7% again next month, with a slow decline after that, but the margin of error is comparable to the rate of decline; if I use a symmetric 50% confidence interval, the top of the interval stays at 9.8% well into the fall, though the optimistic end drops below 9% in the seventh month (the August rate, released in September).
- posted by dWj @ 1:40 PM